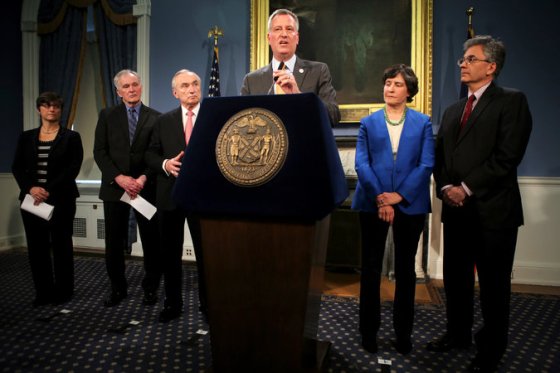 New York City’s mayor Bill de Blasio is bringing in a nationally acclaimed prison reformer, Joseph Ponte, as New York’s newly appointed Commissioner of the NYC Department of Correction. Mr. Ponte has worked in corrections for 40 years, most recently as Commissioner of the Maine Department of Corrections, where he reduced solitary confinement by two-thirds and eliminated disciplinary segregation for people identified as mentally ill. His appointment marks a major sea change in New York City corrections policy, as the NYC Department of Corrections seeks to end the overuse of solitary confinement, curtail officers’ use of excessive force, and improve resources to handle the needs of incarcerated people living with mental illness. If successful, this will lead to healthier people inside prisons and jails and healthier people returning to the community.

In Mr. Ponte’s own words: “Every resident of this city [New York, NY] deserves to be treated with dignity and respect. From schools to hospitals to prisons, we cannot let our commitment to safety and fair resources falter for a single member of our society. We need to end the culture of excessive solitary confinement and unnecessary force, and bring a new mentality of respect and safety to our wardens, officers and inmates alike.”

Root & Rebound is thrilled to see the nation’s largest city bring a major reformer into the world of corrections. In past blog posts, we have written about awful prison practices like solitary confinement, which only serve to break people down and exacerbate mental illness. Dignity & respect, as Mr. Ponte so eloquently said, underly the need to reform and eliminate such practices. Treating people currently and formerly incarcerated with dignity & respect will lead to healthier, happier, more productive people both inside and outside of prisons and jails.

Read more about this story in the N.Y. Times & from the NYC Office of the Mayor.