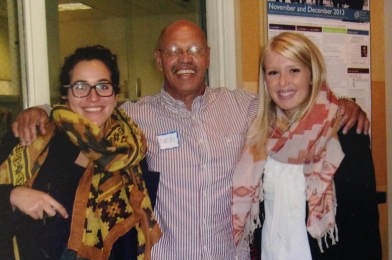 Back in October, we wrote a Community Member Profile about Alton McSween (a.k.a. “Coach”), our professional mentor and dear friend. And if you happened to tune into radio station 94.1 KPFA at 7:00 a.m. this morning, you would have caught an extraordinary interview with Coach about his transition from San Quentin to living and working in Berkeley, Oakland and challenges and joys of reentry in the Berkeley community. He also speaks to his feelings about the 3 Strikes Law passed in 1996, his feelings on why punitive and draconian laws do not serve as a deterrent to criminal behavior, and why “the penalty should fit the crime.”

You can access the interview with Coach here: www.kpfa.org/archive/id/98844 (beginning at minute 33).

As a refresher, Coach was released from San Quentin prison in April 2013 after petitioning for release under the Three Strikes Reform Act (“Prop 36”), which passed in 2012 in California. His life passion is reentry work and criminal justice reform. Nowadays, you may find Coach at work as a Case Manager and Program Coordinator for the California Reentry Institute; volunteering at the Options Recovery Services’ Saturday car wash; or lecturing at a top-tier law school, sharing his wisdom about the California criminal justice system and reentry work alongside the California District Attorney, judges, lawyers, and other field leaders.

Lucky to know you and work beside you, Coach!

It is only our second official week of work and we at Root & Rebound are already meeting with one of the preeminent experts on reentry services in the country at Stanford Law School. Does it get any better than this?

Meet Debbie Mukamal. She joined Stanford Law School in September 2010. From 2005 to 2010, she served as the founding Director of the Prisoner Reentry Institute at John Jay College of Criminal Justice in New York City. Debbie oversaw all of the Institute’s projects, including the design and implementation of the NYC Justice Corps, an innovative neighborhood-based reentry service initiative, and the development of research and effective tools in the areas of entrepreneurship, correctional education, long-term incarceration, and reentry from local jails. Before joining John Jay College, she served as the founding director of the National H.I.R.E. Network and a staff attorney at the Legal Action Center, where her work focused on the collateral consequences of criminal records. Debbie holds a J.D. from New York University School of Law and received her B.A. from the University of California at Berkeley.

In other words, she is brilliant and accomplished and, more importantly, so generous and kind. She took an hour and a half out of her busy schedule to meet with the R&R team.

Debbie helped us brainstorm the different possibilities for a reentry legal and social services model in the Bay Area. She asked us to reflect on what knowledge, skill, and experience our staff has that will truly empower those returning to our community. Debbie said, “There are more than half a million people currently incarcerated or on probation or parole in the state of California. You can’t help everyone directly. But you might be able to touch all those lives through policy reform, or make a big impact on a certain population or in a certain community.”

Debbie described four common reentry services models and strategies for us to consider as we think about how and where we can be most effective for change:

We decided that Model 3 is the best for us to focus and build on. Why? Well, we certainly want to have a focus on legal services & policy advocacy. And, though we want to be community based and integrated, neither Katherine (Executive Director) nor Sonja (Staff Attorney) is originally from the East Bay or even California, so it would be insincere to say we are 100% “in” communities most heavily impacted by incarceration and criminal justice involvement. Rather, we grew up in privileged environments that were not highly policed. We weren’t thrown on the sidewalk growing up as kids, just for being out late and “looking suspicious.” And neither of us has ever spent a day in jail or prison as an incarcerated person, not free to leave.

Rather, we were able to go to school, feel safe, and always be connected to our families. Now we have law degrees that we believe can and should be used for the benefit of people coming out of prison and jail and hoping to reintegrate into their community. Our role, we believe, is to empower those who want a better future than they had past, and for us to play a supportive role in assisting people to get out of prison and jail, stay out, and thrive.

So that’s what we have decided to build on: Model 3—a public interest law firm with a strong emphasis on individualized legal services and public policy advocacy. So very exciting!

In addition to all the incredible knowledge about reentry services that we learned from meeting with Debbie, and the “AHA!” moment she gave us, we also walked away with the names of wonderful practitioners and reentry organizations doing work in California, New York, and around the country (you’ll be hearing from us!).